Bit of this
Good neighbor J is sat in a heap on the floor when I arrive. The man next door comes to our assistance. No damage done except ruffled hair, skirt and dignity.
5 tiny seeds are planted in a pot.
Stick to the ribs treacle pudding slips down a treat.
Bit of that
snuggle up and keep warm.

Bit of this
She sees the funny side as a Teaching Assistant puts her right on 2nd and 3rd wave intervention. Twernt me, I had no idea either.
The storeroom is a vision of neat and tidy. And will surely now pass any health and safety swoop.
My luck still holds as I drink their coffee and eat a Marks and Spencer goodie.
Bit of that
One Minute Brain Game
Posted by den at 12:39 No comments:

Bit of this
Occasionally you are privy to intimate information.
2 girls are sat in the little house outside chatting while observing a wasp, that has been given a sugar kick in the form of treacle, in an effort to resuscitate it. "The kitten dropped worms from his bottom on the bed, now mummy has worms in her bottom".
The wasp flies off while A and I are hunting for a magnifying glass.
The car is blocked in requiring a cancellation with the Alexander Technique lady. Never mind it has saved me an arm and a leg. And I have a lovely 2 hours walk with whippet.
Bit of that
Wasps
Posted by den at 11:05 1 comment:

Bit of this
Cold wind whipping across my face wakes me up with a shiver. I quicken my pace. By the time whippet and I get home we are both ready for breakfast.
2 small boys have arranged themselves over me. A girl who had chosen to stay out of the circle wanders across and flops down leaning into me and the drama queen has claimed the other side. I have missed them.
The thought of a well being group is making me titter. I shall start using the staff room and suggest group hugs then. "Too late" due to the stress of an imminent inspection "it has been put on hold for now". Titters change to roars.
Bit of that
Greetings from Jupiter
Posted by den at 12:12 No comments:

Bit of this
Saturday
Breathtakingly beautiful Malvern Hills cloaked in snow. Beat of the swans wings flying low up river. Tasty lunch in a quaint tea shop bedecked by ornamental bells. Passing the time of day with lakeland terrier and his friend breaks the trek back to the car.
Sunday
It is delicious, and he gets creative instead of stroppy when some of the indigents are not to be found. It seems man about the house has taken over sunday lunch duty as long as he can fling cream and calories in.
Monday
Whippet and I slip into Spring house garden discovering hidden delights of snow drops, crocuses and witch hazel. Someone has thoughtfully placed a sign warning of slippery steps.
I wander under mature trees and suddenly feel peaceful. Bless you Mrs S C for allowing us to share your garden.
Bit of that
She gives me a book that makes me realize I should buy more recycled paper products. To provide a market for all the paper that goes in the green bin. But buying recycled loo paper is not as simple as I thought.

Consider these simple actions to help reduce your paper use and make better buying choices.

Buy recycled. Tissue products, such as toilet paper, handkerchiefs, napkins and kitchen towels cannot be recycled after use, which is why it is important to ensure that the tissue products you buy contain a high level of recycled content.

Is this product necessary? Don’t use paper products when you can use cloth. Reserve your paper purchases for essentials only.

It doesn’t need to be white. The whiter it is, the more it has been bleached. To reduce chemical exposures, don’t choose the whitest product.

Ask for recycled. If you local store doesn’t stock recycled toilet tissue, ask them to start stocking it.

Read the label. Make sure the claims make sense to you. What is your toilet tissue made from, waste paper or pulp? What percentage of the total is recycled material and is it from a sustainable source? Does it make any claims for safe bleaching processes, such as ‘chlorine free’? If the label isn’t clear, don’t buy the product.

This article first appeared in the Ecologist December 2007

Bit of this
The morning brought a gruel away and bloody get on with it day. As per last nights instruction to self.
3 bags of street litter, gleaming car, half hour tidying a snowy garden, disposing of dog dropping by post box latter, prompting a queer look from 2 young lads in a van as they slow down in amazement at me donned in yellow wet weather gear and new winter hat, that I kid myself makes me look like Hiedi but just accentuates the resemblance to whippet and I no longer feel a waste of space.
Bless her heart she never gave up on me. I don't know why I stopped bouncing the ball weeks ago.
Bit of that
Digging a hole
Posted by den at 12:21 No comments:


Bit of this
A yellow rump streaks away into the trees, and shortly afterwards starts to hammer.
Whippet has a bemused look. Black cat is yowling in protest at being stood on. She has tucked herself underneath the cover and only a bump can be seen. He jumps in fright when she retaliates.
Tweedle Dee and Tweedle Dum the 2 dames of last nights pantomime were spectacular and I have the photo's to prove it. It is their one chance a year to glam it up. They have been a double act for years now, and are the highlight of the show.
Bit of
Tweedle Dee and Tweedle Dum 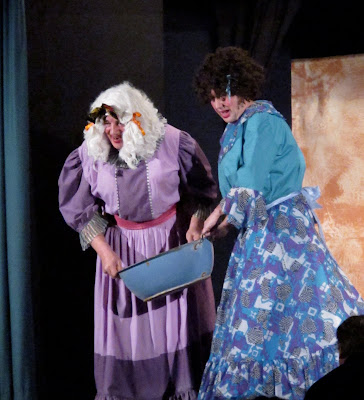 Bit of this
Frustration in the young often is manifest in the unleashing of enegery. Kicking, punching, a three year old girl executed a perfect head butt when one of the boys nicked her doll, pinching, throwing whatever is to hand even chairs, bitting, one child even tried to push me in the canal, and the bog standard wallop using hand or a harmless object that suddenly becomes a lethal weapon. Our newest recruit blows the most spectacular raspberry, swimming goggles are needed. if you are not to loose deep and meaningful eye contact while explaining why sharing is a good idea. And to retain his dignity you must not smile.
The car door is open and much noise blasts out. The stranger and I lock eyes and decide to investigate together. He too is frustrated and cannot find his disable sticker. "They will do me for parking" he mutters. They certainly won't, because we find it.
He turns out to be an engaging young man whose face transforms and becomes alive when he smiles. United in the fact both of us are clutching a camera, we agree to explore the new sports centre together, after we have both photographed the destruction of bits of the old one. "We shall we have an adventure then", he agrees. And suddenly the day lights up from within. I am enchanted by the long bouncy bridge and so are the teenagers who are coming the other way, it responds beautifully to us all jumping up an down. And there from nowhere I am jumping suddenly for joy.
Bit of that
For no other reason than she sprang to mind. Some one once described her as having a dark light.

She lived for the most part in grand squalor [ … but] the conversation was marvellous and went on well into the night.’; quotes Robert Lowell: ‘I’m manic and Caroline’s panic. We’re like two eggs cracking.’ Lowell died in a taxi on his way to Hardwick’s house on leaving Caroline; attachment to Andrew Harvey, Oxford don; speaks of the ‘macabre factoid fairy tale The Last of the Duchess in which she tries but fails ton interview the dying Duchess of Windsor.’

Bit of this
Yards of thin ribbons of ice hanging from the side of the ditch. Stopping before it reaches the bottom.
The smell of fabric conditioner as warm air from the radiator wafts past.
Arrow like whippet stretches. paws forward, nose in line, bum in the air and he yawns, then thumps his back end on the floor.
Bit of that
Do I have the time though? Or more to the point could I meditate my way through the sodding shoulder? Least I would be happy in my misery. (yes I am feeling sorry for myself). Today I am allowed tomorrow I am not.

Matthieu Ricard is a Buddhist monk, author and former scientist, who has lived and studied in the Himalayas for the last forty years. He was once dubbed ‘the happiest man in the world’ following MRI scans on his brain. Although he questions the accuracy of this claim, he puts his contentment down to regular meditation. In The Art of Meditation Matthieu Ricard shares his thoughts and experience.

The Art of Meditation is published by Atlantic Books.